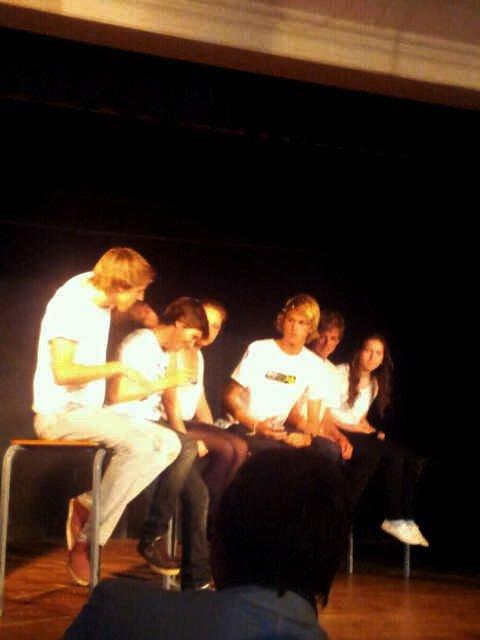 The 3rd annual inter-house Drama Festival was an outright success. From on-stage improvisation, to last minute set changes, it was a wonderful event. One does not get to see all the hidden talent in our little school very often, but wow, do we have some remarkable talent.

Opening up the night was ‘Lemon Tree’, written and directed by Joshua Pama. Being involved in this play myself, I got to see the making of it and all the hard work that went into the performance. Josh was a brilliant director, keeping calm and focusing on all the finer details he wanted in order to perfect the play. Xolisa Dinga was brilliant in his acting and went on to win best supporting actor. For such a quiet, friendly, unassuming person he did an astounding job as a stern, unpleasant camp supervisor. Greg Cuthbert was also highly entertaining with his light-hearted ways and comical facial expressions.

‘Tupperware Ashes’ and ‘A Dancer’s Tragedy’ were both very entertaining and well directed. ‘A Dancer’s Tragedy’, written and directed by Luca van Schoor, made excellent use of a light behind a canvas screen showing the silhouettes behind it – a method I particularly liked. I give a lot of credit to Callam Tait and Josh Bennett who had to be the male ballerinas and to Josh, who did a dance number with Sarah Davies; you could see the absolute concentration on his face the entire time. ‘Tupperware Ashes’ had some well thought out planning and was a pleasant story.

‘4 in One’, directed and written by Adam Oosthuizen was definitely one of my favourite scripts. Using some brilliant techniques for both effects and set design (they went on to win best set), it was a very enjoyable play. I loved how much thought had gone into both the writing of the script and the making of the play. It had a lot of clever techniques, such as Nick Reid walking on stage and moving a clock to show time had passed, or the daily routine of the character being played to appropriate music.

‘A Midsummer’s Nightmare’, written and directed by Iqraa Daniels in Grade 9, had a very complex plot which clearly had a lot of thought put into it. Particularly entertaining for me was Ben Giliomee, portraying a girl which, as always when a male portrays someone of the opposite gender, was hilarious. Fransu Myburgh was hysterical, but possibly not for the reasons they had intended originally. He forgot the majority of his lines, having to eventually read his script on stage. Despite this, he made it work and the audience found it highly entertaining and he went along with them, not allowing it to become a nightmare for himself!

Written and directed by James Wallington, ‘Will, the Champion of the World’ was very entertaining. It had a number of comical moments and the few actors in it were very good. David Thesen kept up a very believable English accent the entire time and kept to his serious character very well. Rhys Owen, Adam Pentz and Nick Thompson, were brilliant, even though they had very few lines, their slight facial expressions and demeanour were excellent.

Saving one of the best for last in the program, ‘Jelly Beans’ was written and directed by Mirren Sharp. This play had one of those mind-blowing plots, filled with a wide range of emotions from laughing to being petrified. Nicole Bayes, who played the main role and went on to win best actress of the night, did both an amazing and an extremely unbelievable job. Playing a psychotic girl and almost scaring half of the audience out of their seats with her deranged laugh, she did a sterling job. I commend Mirren for such a clever plot, possibly my best of the night.

And now for the best overall- ‘Qotgqothwane’. This play may have had a name that’s seemingly impossible to pronounce, but don’t let that fool you, as it was no less than brilliant. Written by James Cooney and Luke Mincione and directed by them accompanied by Lulu Read, it’s almost hard to believe that it was written by two Grade 9 boys and pulled off so brilliantly in such a short space of time. Every single person watching this play was in absolute hysterics from start to finish. With some witty and hilarious one-liners, to some very believable African accents, it was hard not to laugh at almost every sentence. James Cooney, who also acted in it, went on to very deservingly win the best actor award. He put on an incredible show and played his part very well, both with comical mannerisms and a hilarious accent. The sangoma in the play, Lulu Read, was naturally outstanding as well, also pulling off her character marvellously and adding to the greatness of it all. Unsurprisingly to all, this play dominated the awards, winning best supporting actress (Lulu Read), best actor (James Cooney), best script, best director and best one-liner.
All in all, the Drama Festival was a resounding success. It’s always lovely to watch a whole school come together like that and not only to produce such excellent plays, but to learn and laugh together. Having Grade 8’s interact with Grade 11’s, having kids face their fears and act for the first time, or even the creativity that went into the set design, this event was a wonderful experience for one and all.