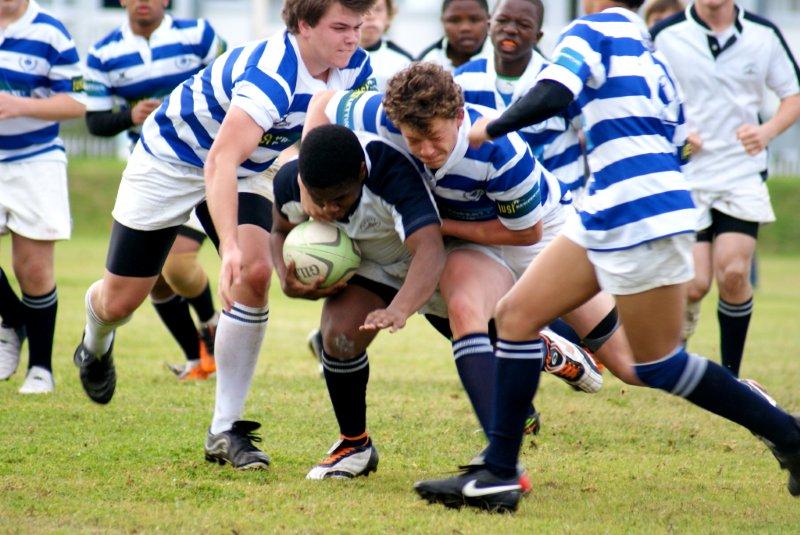 The 28th of July 2012 will now go down in history as the day that Oakhill School’s first ever 15 man team competed in a school boy rugby match, with the first ever opponents being Knysna High School.

Rugby was brought to the school back in 2009, but as it was a new sport to most people at Oakhill, there were only enough players to make up a 7’s team.  Much growth has taken place within the team since then and rugby is now developing into one of the more popular winter sports that Oakhill has to offer.

The 15 Oakhill Champs lined up beside the field and a great feeling of accomplishment was felt before kick-off had even taken place, as each individual knew that the fact that this fixture was even a possibility was an achievement on its own.  The game started and a physical battle began with the Oakhill forwards making every tackle, clearing every ruck and stealing every ball on offer.  Fifteen minutes into the game and the scores were still locked at 0-0.  Eventually, after numerous phases of attack from Knysna High, they were able to get over the line to score the first try of the match. Oakhill gave the perfect response, winning the ball from the kick-off deep inside Knysna High’s twenty two, with Mazi Myo crashing over the try line to score Oakhill’s first ever try in this format of the game.  The teams went into the break with the scores at 5-5.  The second half proved to be just as physical as the first.  With Knysna High on continuous attack, forcing Oakhill to make tackle after tackle; it was just a matter of time before Knysna High was to score.  And although Oakhill weren’t giving much away, Knysna High was able to score a further try.  But Oakhill stuck to doing the basics right and were deservedly rewarded with a try that started after a turn over and well executed counter attack, where 80 metres of ground was gained on the field, with Josh Nel eventually scoring in the corner.  With the score at 19-10 with just a few minutes left on the clock, Oakhill kept faith and kept attacking.  But the Knysna High defence held strong and left the Oakhill backline frustrated after giving it their absolute all.

Despite the loss, the Oakhill boys, the coaching staff and every supporter were ecstatic with a very solid performance where not much might have been expected from the freshman to the sport.  Both the Knysna High and Oakhill teams got together after the match and celebrated the occasion in high spirits.  A very entertaining and memorable day of rugby was experienced by all who were there to witness Oakhill stamp their names in sporting history!

The Oakhill players and coaches who made history and who deserve to be saluted: