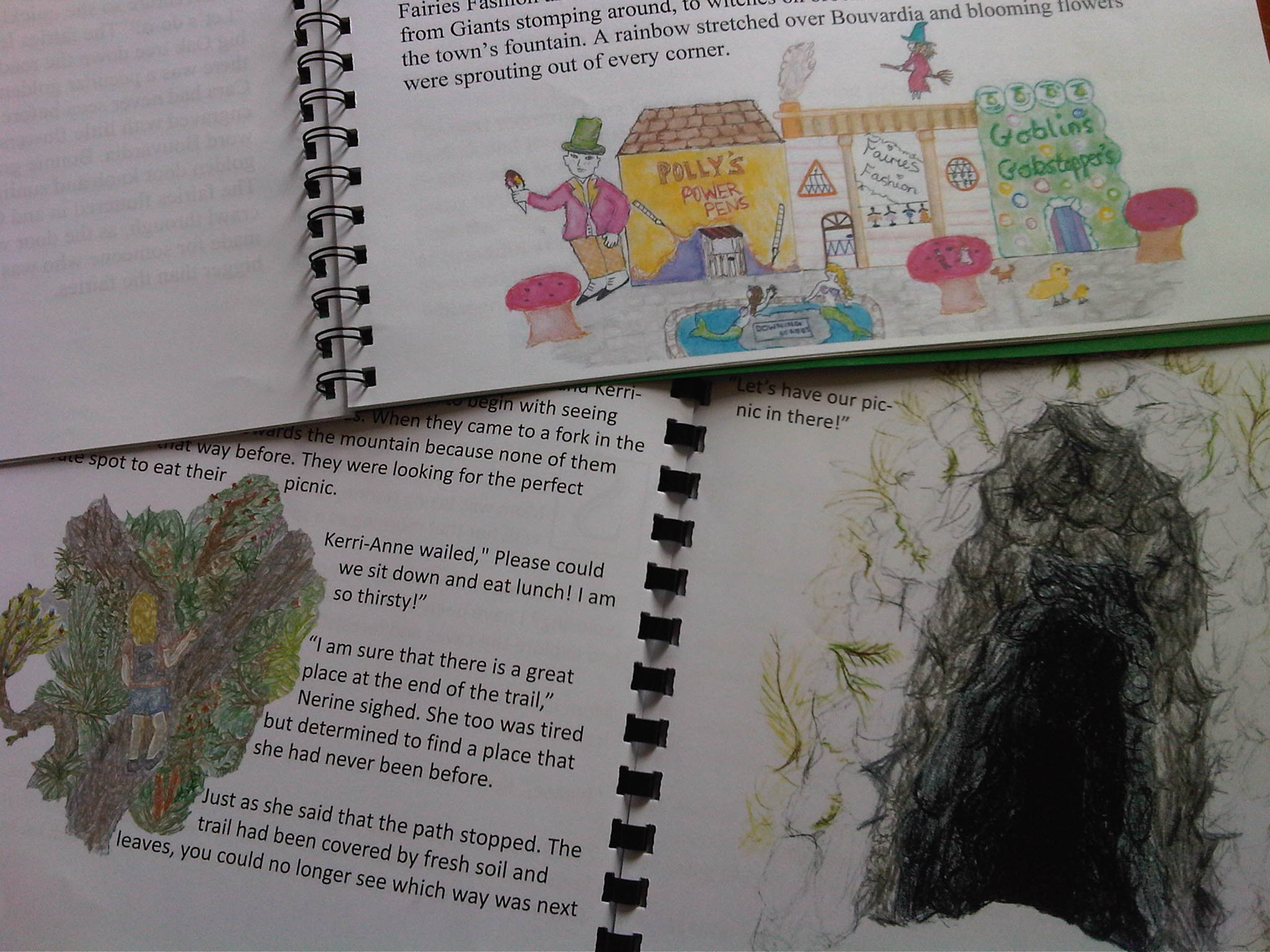 There is something frightening about teaching English in a small coastal town, but also something refreshing. We are sometimes frightened by the well-staffed, highly articulate, competitive nature of the city schools, and sometimes frightened of the dark, when we proceed by feel and not by sight. Conversely, it is refreshing to have to initiate and formulate and ‘energise’ our own materials and to enjoy a type of lightness of being, unburdened by competition. We like to believe that this energy and freshness is reflected in the creative thinking of our students.

Needless to say, we are always refreshed, re-energised and inspired through our interactions at the IEB English Conference. This article serves to reinforce the importance of this inter-action and to give credit to those who are willing to share their wisdom and their success stories. In this case, I give the credit to Minky Antrobus and her English Department at Elkanah House, who inspired us with their Shared Storybook Project.

I loved the concept and I knew that it we could use it to bridge the divide between Prep School and College, as they had done at Elkanah. Although we share the same campus – a small enough one, at that –the College and the Prep School spend too little time getting to know one-another; particularly the students.

This beautiful story involves the creation of stories: a Grade 8 student writes a book for a Grade 3 student. A simple project. But, it is not the project itself, but the process that became a joy. One blue-skied spring morning, and with a spring in the step, we made our way up to the Prep School. Soon, coupled together, the ‘senior’ was in deep conversation with the ‘junior’. This never happens. He, or she, was asking questions and finding out the interesting details of the little person’s life. This information became the life-blood of a story, and the child, the heart of it. Where the process of writing, peer-editing, final editing was exciting; the illustrating was exhilarating. Hand-drawn and colourfully painted goblins and cats and little girls on horses appeared. And, the finished products were infinitely wonderful: collated and covered.

On the appointed day, with bright cupcakes, we proceeded again to the Prep School to present the stories. A loud cheer rang out in the Grade 3 classroom and, once again, small huddles formed as the books were opened and the magic of seeing one’s person in print and picture was absorbed and wondered at.

Towards the back of the classroom, two boys hung back. There was a problem. They were agitated, one close to tears. ‘I can’t give this to my partner,’ muttered the first, ‘it’s ugly, I haven’t finished it properly!’ For this boy, writing is not an easy process, but he had had a bright idea, incorporating his young partner’s love of nature parks, but fear of spiders. I knew that he had worked against his difficulties, had created a story and that we had edited it together. He was just unable to finish the project satisfactorily – had run out of energy. Now, when it really counted, he had let someone down.

The second tall fourteen year-old was devastated. He had not even completed the story and had nothing to give to his young partner. So, one child sat with nothing in front of him, with a brave, but embarrassed expression on his face. The tall boy had never felt so small! He too had let someone down.

In an instant we had to restore the situation. Boy number one had to present his book. We told him it was a brave effort and he offered it and disappeared. He had learned a valuable lesson!

With an arm round his shoulder, we escorted the second boy out of the room, whereupon a flood of tears gushed forth. I took a walk with him and talked about accountability and making mistakes. He agreed that when we are accountable to someone else we just cannot let them down. He agreed that it would have been much better to have faced his teacher and to tell her that he could not, or was not getting to his story. He also learned that when we make a mistake, it is not the end of the world – we simply learn a really valuable life-lesson. It is in the honest owning-up to our mistakes that we can make right, not in trying to bury them.  As we talked he gained perspective on the situation and began to feel better: he lifted his head and wiped his tears.

The storybooks were packed away in a pre-camp flurry and we left the Prep School. Most felt proud of a job well done and with hearts full of the act of giving. Our two boys walked with heads up once-again, but with something learned that will last a lot longer in their own life-stories. Real growth will have happened if we observe changed behaviour in a second project, different, but with the same accountability factor.

I am currently seeking ideas for another shared project!

“I watched the young and impressionable faces of my 2011 Grade 3 class as the Grade 8 class entered. It became obvious that, to them, the other students coming in to their class must have seemed taller than the average tree!”

As a class we had spent the year enjoying a weekly “book club” session,  investigating authors, titles, non-fiction, preferences and personal choices. We had chatted about “main ideas”, characters, key-words and had begun to discover the wonderful world of books. We encouraged each other to explore and address our own interests and when Mrs. Pasio came to speak to me about linking her Grade 8 English class with my Grade 3’s we were all excited.

For some just the thought of going off quietly to sit under a tree to “chat” was terrifying but we were soon scattered all over the campus. The interaction taking place, invaluable! The wonder and awe shining in the little eyes obvious! The caring and gentle manner in which the interviewer handled each question, remarkable!

Over the next few days, weeks the question asked was, “when are our books going to be ready?” in eager anticipation of their own life’s story; becoming the “main character” in a printed and meaningful text!

Seeing the joy and wonderment on a class of 9-year-olds as they paged through books bound, stapled, tied and taped, with hand- painted, printed and laminated covers, was truly rewarding.

The class decided that a hand written thank you letter was in order. So we began our second part of the project: hand drawing illustrations and finding out how to spell the “author’s” names correctly.

Placing these special books on display allowed others to benefit from this project but those that benefitted most were the two Grades that through their interaction with each other learnt that “it’s kind of fun to do the impossible”- Walt Disney.