Miranda and the Magic Sponge 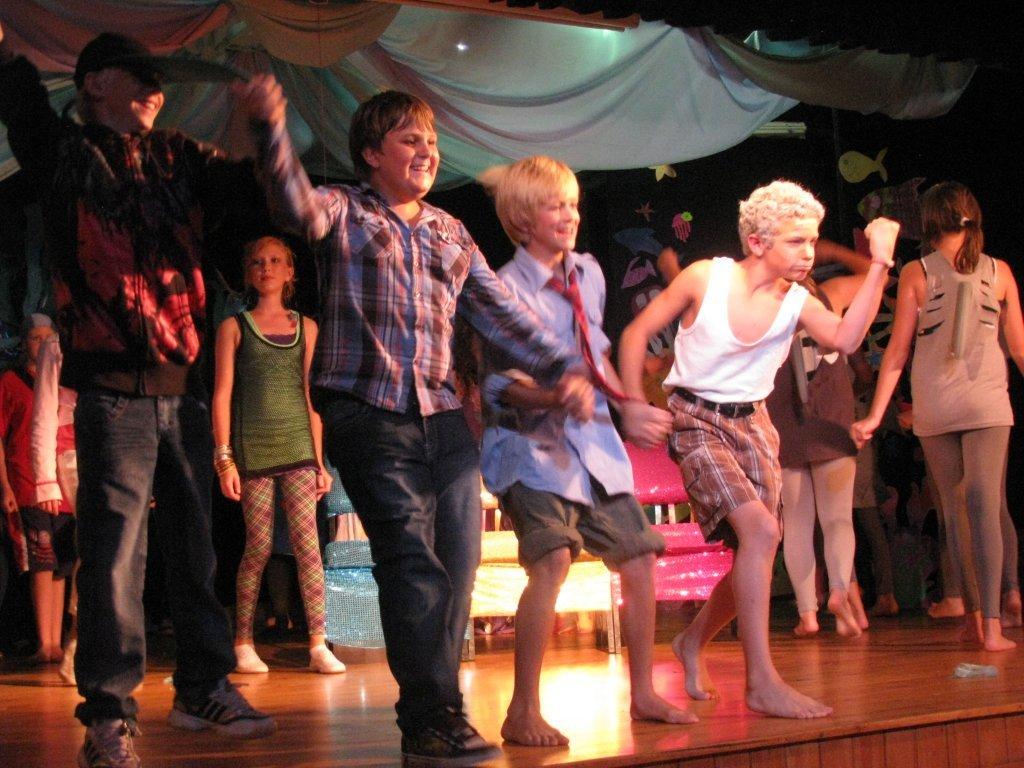 What a night of quality entertainment we had at Oakhill last week! The play, ‘Miranda and the Magic Sponge’ was directed by Beatrix Hardick and performed by children from the Intermediate Phase of the Junior School. Good organisation and training by Beatrix ensured an extremely polished performance on both nights of the 16th and 17th March.

The play is about a young girl, played by Holly Andrews, who lives with a nasty uncle near the sea. While searching for fish for supper she happens upon a sea creature, Peter Polyp, who gives her a magic sponge which enables her to breathe under water. Under the sea a competition is being prepared for, to establish which of the three nasty sea witches is the most beautiful. Intertwined in this story are a rogue actor (Kenhardt Scheepers), a director (Alex Patz) and a policeman (Jake Turner) who keep interrupting the story making hilarious contributions with acting skills which belie their age. The happy ending with a little moral lesson is a good conclusion to the story.

I sat entranced throughout the entire play. It is fast moving and cleverly involves the audience at times. The highlight of the play for me, was the little insert of a movie clip which was filmed on the lagoon showing the nasty uncle (Liam Sofianos) speeding along in the boat with some bullies, Sven Botha and Callum Nicoll. (The bullies are paid by the uncle to help after intimidating Miranda with a baseball bat and skilful circling on a jay board earlier in the play.) They are searching for Miranda whom they know is under the sea. As the uncle dives off the boat on the screen, the sharks, who form an integral part of the nastiness going on under water, are on stage and snap at the uncle’s heels, who makes quick work of jumping on board again!

The backdrop for the beach scene at the beginning of the play was painted simply, impressionist- style of dunes, blue sky and seagulls. The underwater scene was gaspingly beautiful with a black background and bright sea creatures and rocks drawn and made by the art club. Streamers of tinsel and green and blue shiny material give it an aquatic feel with a clever touch of helium balloons for a bubbly effect.

The costumes and make up where outstanding. Our three queens, Morgan Watson, Jade Wolf and Isabella Fulford, equally beautiful in their different coloured long gowns were all breath taking in their talents and appearance. Each queen was carefully decorated to fit their theme of coral, pearl or seaweed. The shiver of sharks were dressed in grey with slits cut into their shirts to give an impression of gills. Their faces were realistic with huge teeth and impassive eyes. Their acting was excellent with their dry humour and collective nasty sniggers. Our funny group of life savers were chosen with a sense of humour. Amy Lupton was the leader who controlled (or attempted to control) her inadequate troop with commanding authority in her voice. Nathan Austin and Steven Henderson had everyone in fits of laughter at their deliberate inadequacies and clumsiness. Bella Stevenson added to the quirkiness of the group by continuing to act with her crutches and broken foot!

Poor Peter Polyp , Louis Maarsingh, had an emergency appendectomy the night before the first performance and our very talented director and actress Beatrix Hardick had to step in and play the part. To everyone’s delight, he managed to perform on the second night. Young Luc van den Handel played the wicked Octopus in his fantastic eight legged outfit. The witches’ hairdressers, Nicole Meyer and Tyrone Minnie were hilarious in their panic when all three witches arrived for their appointments at the same time.

I have not mentioned all our talented young actors and actresses by name, but all the fishermen and women, all the sea weed and all our backstage crew worked together to create a marvellous show.
Well done and congratulations!