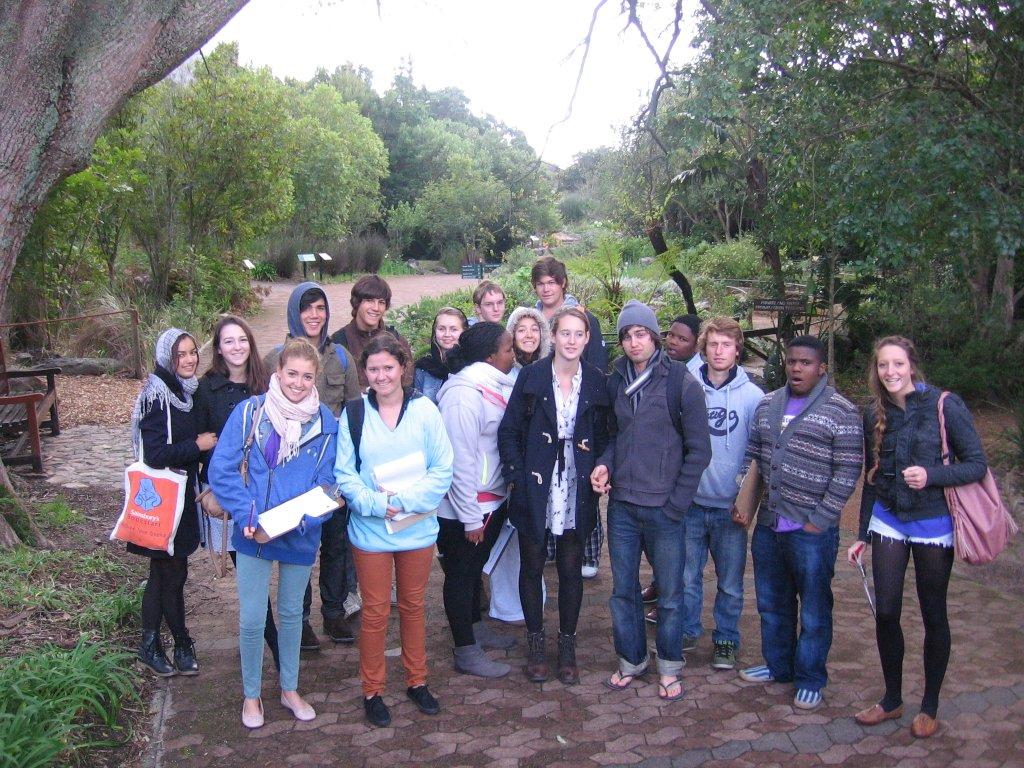 Every year, the Grade 11 Biology classes leave Knysna to get a more hands-on Biology experience in Cape Town. Many of the students were loath starting the journey at six in the morning, but we all managed to drag ourselves out of bed and into the tour bus.

There was no time for relaxing as we got to Cape Town – the bus headed straight to UCT for a lecture and workshop at the Oceanography Department. During the workshops we inspected some curious sea creatures, that we were allowed to feel and hold (gently) and following that we were taken to see the naked mole rat room. The mole rats were incredibly fascinating because they have a set social structure much like bees and also because they have a rather…. strange appearance.

That evening we visited the Grand West Casino where we watched a film and had dinner. The next morning we had to get up early –again – to visit Mouille Point to observe the ocean life, seen the day before, but this time, in their natural habitat. The class found a sand shark in one of the smaller pools and one of our intrepid Oakhill students picked the shark up and put it back into the ocean so that it could move around freely.

After breakfast we were scheduled to visit the ARTS Centre in Athlone. Expecting to view Art in a gallery, you can imagine our surprise when we discovered that ARTS was an acronym for Athlone Refuse Transfer Station, a solid waste management centre for Cape Town’s refuse. The students were taken to buildings where we could see the various stages of refuse disposal. The students were shocked at how much waste there was and wondered how anybody could get used to the pervasive smell of the place.

That afternoon we had more workshops on sea life. We visited the Two Oceans Aquarium at the Cape Town Waterfront where we were given an opportunity to look at some of the sea creatures native to South African shores. The students had to cut open sardines to examine the different organs. This was a particularly exciting experience for us, for obvious reasons. That evening everyone got dolled up – at Ms le Fleur’s request – to go and watch a play called ‘Other People’s Lives’ at the Artscape Theatre. The play was a great diversion from all the learning that was happening.

The next day was incredibly interesting. The students first visited the Tygerberg Hospital and we finally got to see the cadavers that every Grade 11 class before has waxed lyrical about, and rightly so, they were great! Our class was split into groups and two students from Stellenbosch University showed us the bodies. We got to see and pass around various organs such as the heart and lungs. The students saw first-hand the effects of smoking and drinking in the form of black lungs and roughly textured livers respectively.

Having viewed the cadavers we were taken to a museum downstairs where we were shown babies in the various stages of development from an embryo to a fully-fledged foetus still in the womb. We also got to see babies with severe abnormalities – most of the babies and organs that were kept were even older than us because the museum specimens were attained in the 70’s and 80’s.

After leaving the hospital we had lunch in Rondebosch and then visited Groote Schuur, where the first successful human heart transplant took place. We saw the original operating rooms where it all happened and we got to see life-size – and eerily life-like – wax replicas of Chris Barnard and some of the other surgeons.

That evening we had dinner at Primi Piatti, the customary eating-place for Oakhill Biology tours. The food was great, as was the atmosphere.

Our last day in Cape Town was spent in Kirstenbosch where we were shown the various plant species in the gardens after having a quick lecture on the types of plants. It was incredibly cold, so before we started walking around the trailer was opened to get some more clothes from our suitcases – we must have looked like we were making some bold fashion statements because anything that was warm was put on!

Our very last stop before home, was a mall in Somerset West, to purchase some lunch. The bus ride home was peaceful – everyone fell asleep!