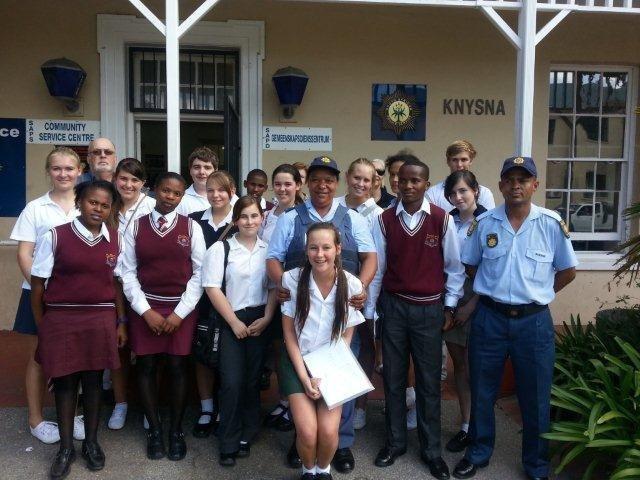 On 24 January 2013, I, Kristin Groenewald and 3 of my peers, Cosima Schunke, Luke Mincione and Amy Williams were accompanied by Rotary members and other students from various schools in the Knysna area, to attend a 2 day program called “Know Your Town”.

The entire point of the excursion was to show the youth of South Africa how sectors of our country and the world as a whole, work. Sometimes people become so wrapped up in their own lives, they forget that the world is so much bigger than just an “us”, our schools, our friends and our activities. To help change the world and to make a difference, we need to first understand how it functions.

Firstly, we sat in on a Town Council Meeting. We listened as members of the Democratic Alliance, the African National Congress and our own Mayor of Knysna, discussed important issues surrounding our province. It was absolutely amazing to be sitting in a room where we were listening to a discussion involving important decisions that were being analysed right in front of us. The session started with a prayer, then became formal; all cell phones were switched off. The minutes from the previous session were revised to check for validity and accuracy of the statements made. After each meeting, a report with additional information is available from the Mayor on request. New members were introduced, the tourism agreement, financial reports and responsibilities, repairs and maintenance, investments and problems with service delivery were discussed. The members talked about the importance of progress and driving their projects with motivation rather than just managing them. Problem areas were not brushed aside, but brought to the fore with a focus on improvement. During intermission, it was interesting to see how the tension was suddenly much less and the political figures simply became people. People with voices, who wanted to have their side heard and to take care of our town. The debate was complex and intense, but critically important and fascinating.

We then visited the Court. We met the Head Prosecutor who explained to us how a legal case is set up. We were then taken into a Court room. He showed us the layout of the room; the gallery where the people sit quietly and watch the proceedings, where the accused stands, where the witnesses stand, where the judge sits and where the guards are situated. He explained how a rape case would be treated. Where the victim can sit in a room separate from where the accused is, as they may not be able to be in the same room with their attacker. The victim listens to, watches and responds to everything via a monitor. We were then taken in to an actual case. This was a surreal moment. Outside people were going on with their daily business and literally an arms length in front of us was a man who received a sentence of six years for theft, alcohol and drug abuse. He was shackled as he had escaped twice already. We truly got to witness the importance of justice.

Later, at the police station we were reminded that for every action there is a reaction and for every decision we make, there are consequences that people must face, as we were shown around the cells. Perhaps if more school children where shown what we saw that day, the crime rate would be substantially lower. It was incredible to have time with the police officers, to ask questions and to share momentarily what their jobs entailed. The officers were amazing and so approachable. They just wanted us to understand and learn as much as possible. We saw a display of how fingerprints are collected. They showed us the special white powder that is dusted over a crime scene and the light that is shone over it, out of what looks like a torch, but instead of a white light, a blue light shines forth. We shared an activity which was like broken telephone, but with movements, instead of sounds, to show how information changes as it is passed from person to person and how data is not always reliable. You cannot always believe everything one witness claims to have seen. We saw a wide range of firearms at the police station; those taken from murder or attempted murder scenes, confiscated guns and those handed in.  Then we took a trip to the morgue and were shown where the bodies are taken for autopsies. The specialist working there showed us the various equipment and instruments used. The gloves they use are called steel or chain gloves. They look like normal gloves except they have chains all over to protect the forensic specialists from injuring themselves while they are determining the cause of death. There was even a scale and a white board used for measuring and recording the plethora of lengths and weights of organs. This was really interesting.

Lastly we visited the library, a haven of knowledge. We were shown how to utilise the resources available there to gather the information we may need for our school work and projects.

On Friday, the 25th January 2013, our first port of call was the Knysna Provincial Hospital. It was wonderful to see the renovations and improvements being made to our local provincial hospital, where state patients will benefit greatly from these changes. We visited the dark room, where x-rays are developed, the orthopaedic ward, the maternity ward, the trauma ward. It was incredible to talk to the people who save lives on a daily basis. Next on the list was a visit to the fire station. We thoroughly enjoyed this part of the tour. We got to see everything, from the enormous fire trucks to the incredible Jaws of Life, the different methods of extinguishing fires, for example, fires caused by oil spills cannot be put out with water, as oil is lighter than water and so simply floats on top of the water and so a special foam has to be used. Some of us even got to hold the fire hose and feel the astronomical pressure of the spray. It was an honour to have the opportunity to interact with such noble people. These firemen and women risk their lives to protect and rescue others. They do not get paid large sums of money and are actually not appreciated nearly as much as they should be. To meet people who are so dedicated, passionate, unselfish, caring and inspirational was a privilege and a moment I will never forget.

The second last part of our amazing excursion was a visit to SAN Parks – South African National Parks. Here we met people, who are those rare individuals, who can wake up in the morning and know that they are making a difference in this world. Here, the leaders explained to us all about the plethora of projects that they design and are involved in to help contribute to saving the environment and working towards a greener future for everyone. We were taught about the importance of treasuring and protecting the biodiversity of our country, how the environment around us functions, how everything we do, makes an impact and how we can create a change for the better, as the youth of South Africa. Not just for ourselves, but for future generations. We also caught a glimpse of a Knysna treasure, the Knysna Seahorse.

To end our final day, we paid a visit to the NSRI – National Sea Rescue Institute. We looked at their boats and emergency equipment. We truly grasped the immensity of what these brave warriors, as volunteers do when they showed us a room with 21 life jackets set up in honour of the 21 lives lost during the process of saving others in the gargantuan waves over time.

The whole tour was an experience beyond finding the right and appropriate words to use – a most meaningful experience beyond words. We got to meet some of the best people. People who make our country and the world we live in a better place, simply by doing their jobs. It was an eye-opening adventure. Our perspective and views on life were really broadened. I learnt so much and would recommend this mini-journey to as many people as possible.