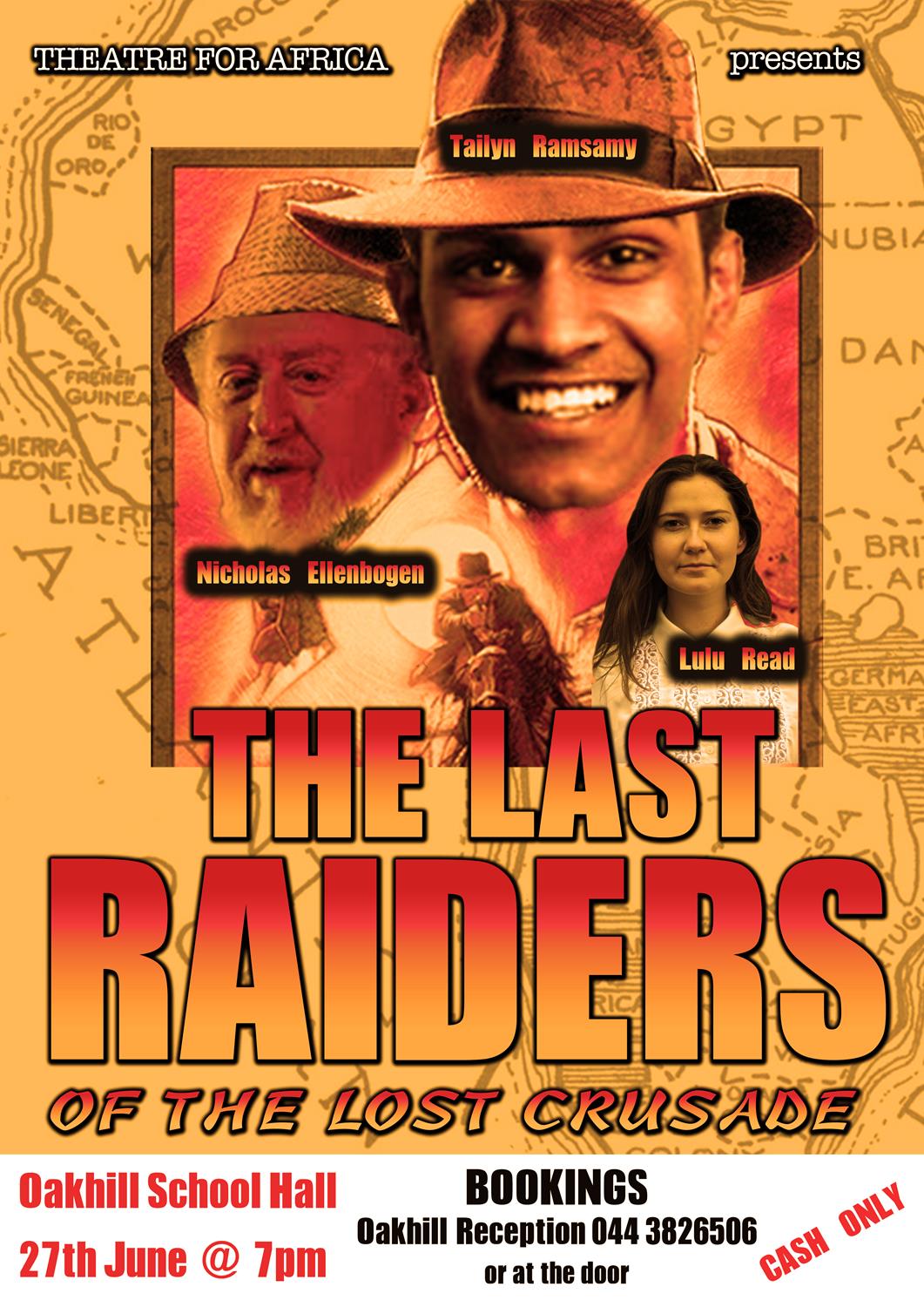 Oakhill is thrilled to be hosting a production of The Last Raiders of the Lost Crusade on Wednesday, 27 June at 19h00.

We are in for a treat with Old Oak, Lulu Read as part of the cast in this series, commonly known and famous in South Africa, as Raiders. This is the 30th in the series, and potentially the last. The Raiders’s shows are comedy adventure tales that always involve audience participation. The Raiders founder and creator, Nicholas Ellenbogen is a South African theatre legend. The Last Raiders of the Lost Crusade is zany adventure tale full of comedic madness and audience participation.

More about the Raiders series …

The Last Raiders of the Lost Crusade is commonly known across South Africa as Raiders. The Raiders series has garnered international awards over the years and has seen three generations of wonderful public support. Each Raiders is a madcap zany adventure tale, usually based around a historic event, that sees crazy characters use whacky puns and props in its own brand of storytelling. Much of the fun of Raiders is the active audience participation as the rest of the cast is drawn from their seats to play various characters to complete the outrageous mission. In The Last Raiders of the Lost Crusade the year is 1940, and the action sees Professor Salty Mophet fly from Johannesburg to Cairo in his trusty yellow Aardvark, a Tiger Moth aeroplane. Salty’s mission is to find The Holy Grail, at Winston Churchill’s urgent request. Salty needs to get to this chalice before his nemesis, 9-year-old Shputin gets in his way. In true Raiders style there’s smoke bombs and flying bananas, and you might find yourself playing the rear end of a camel.

The creator of this innovative series is highly acclaimed theatre-maker, playwright, director and actor Nicholas Ellenbogen. He is the founder member of Theatre for Africa, which has performed for audiences all over the world including Queen Elizabeth II. He has also produced over 150 of his own works for the stage.

Will it be the last Raiders? With Ellenbogen in his 70th year? Although there are no signs of slowing down from the old master in this last action-packed adventure being hurled along by the explosive energy of Lulu Read and Tailyn Ramsamy.

Lulu Read, born and raised in Knysna, returns to her old school, Oakhill, for a once-off performance of The Last Raiders of the Lost Crusade, as the cast make their way to Grahamstown for the National Arts Festival.  During her time at Oakhill she was the head of the SRC for two years, house captain and first team hockey captain.

Her Theatre and Performance degree at UCT is the top theatre degree to study in Africa and only about 15 students are accepted to study the acting stream each year. Lulu was on the Dean’s Merit List during her entire time at University and is also a member of the Golden Key International Honours Society. She has just graduated her Honours Degree with distinction in Drama and Acting and as well as the Degree with Distinction. Her recent roles include playing the Countess in Alls Well that Ends Well directed by Geoffrey Hyland and Cassandra in UCT’s production of Agamemnon.

Tailyn Ramsamy is also a graduate of UCT’s Theatre and Performance degree, having studied with Lulu for the past four years. Tailyn is a YoTV teen presenter-turned-actor who has just come back from Romania where he performed in a production of Macbeth at the International Shakespeare festival. Other notable roles include Simon in Geoffrey Hyland’s production of Lilies and co-starring in Rajesh Gopie’s Out of Bounds.