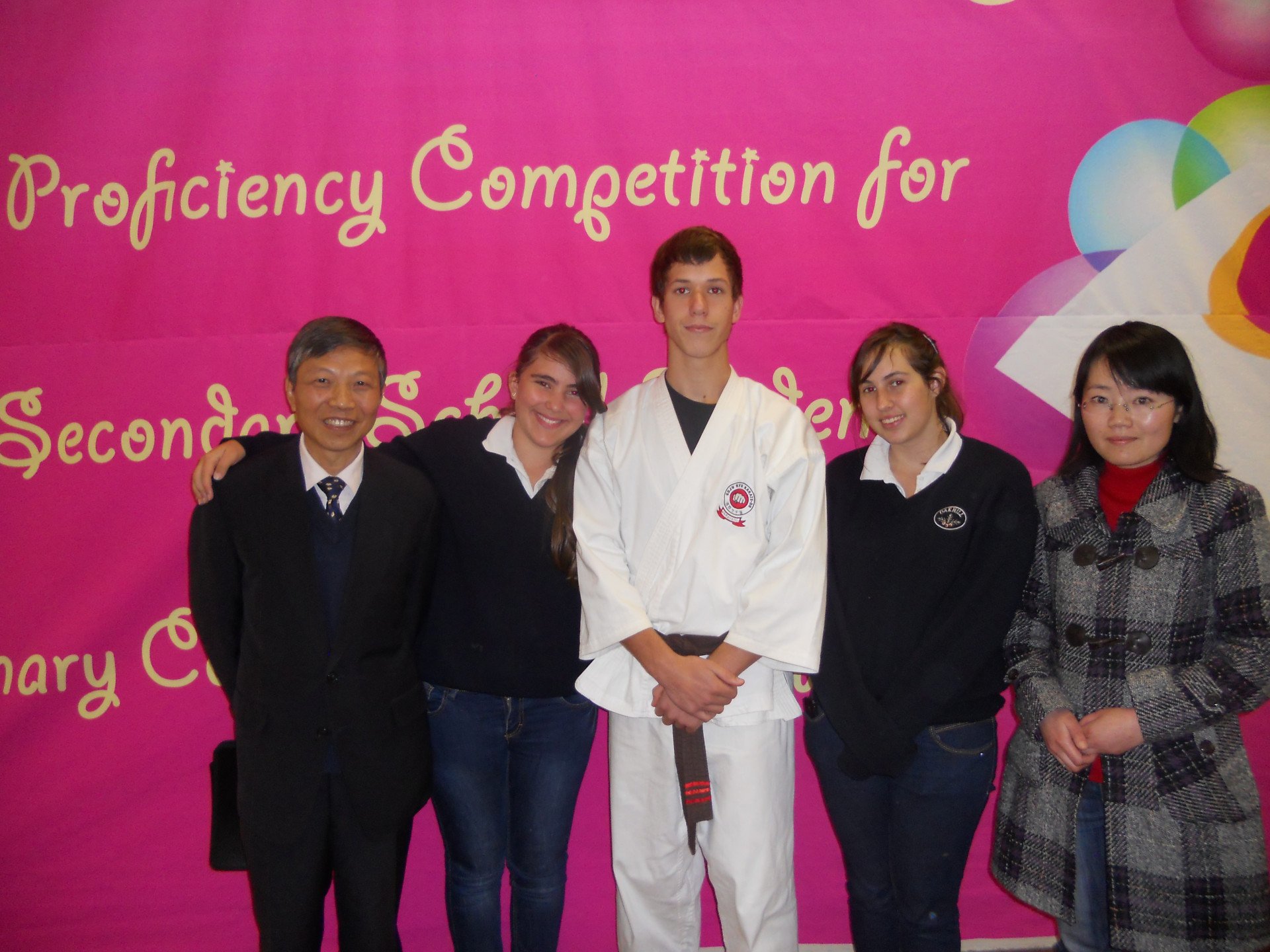 After rigorous auditions which entailed a one and a half to three minute speech entirely in Chinese, a presentation on the rich and diverse history of China and a cultural activity of either painting, singing, dancing or martial arts, 3 grade 9 students were chosen to attend the competition in Cape Town; Kristin Groenewald, Saskia Bronkhorst and Joshua Nel.

Mandarin Chinese is a very difficult, yet absolutely fascinating language to learn. Words cannot be sounded out as there are no individual syllables, but rather an accumulation and combination of sounds for each letter. A word spelt exactly the same, can have a myriad of different meanings simply by changing the way you pronounce it. Thus after many hours of practice and preparation, we were ready to embark on this amazing journey.

Joined by Mrs Schoeman, who was attending a Music conference in Cape Town, we set off, and what a phenomenal adventure it was. Mrs Hu made us “padkos” which consisted of chicken cooked in coke, beef and vegetable dumplings and fruit. Driving to Cape Town we experienced the beauty of our country and stopped in George and were almost blown away by the force of the wind. Mrs Hu was almost whipped clean off her feet and as our coats swirled around us, we almost took flight!

Mr Botha might smile when he reads this, as I say that he was a brilliant leader, never complained once about the long drive and took great care of us. Yet, Mr Botha is not a man with a sense of direction. We got lost more times than we could count. It was almost as though our GPS (newly named Sarafina) was plotting against us! However, I am thankful for this, for despite our hopeless geographical wit, we have so many precious memories to cherish. We laughed more than we could breathe, whether it was about the two petrol attendants that pointed left and right at exactly the same time when we asked for directions to the local mechanic (we had a steaming tire you see, yes, steaming), or Josh running up and down the road in his pyjamas, which he insisted were his “travelling clothes”, attempting to buy biltong for Mrs Hu, so that she could experience the real South African culture, or Mrs Hu buying enough soy sauce at China Town to last for years!

On arrival at the Cape Academy of Science, Mathematics and Technology, we had to perform three tasks which put our weeks and weeks of preparation to the test; a three minute speech in Chinese, either art or martial arts and we had to write a test (no English allowed) about the culture and history of China which included writing out the Chinese characters (symbols) that we had learnt about.

We were then treated to a show by a professional Martial Arts Master, a famous Chinese opera singer, with a voice that was the epitome of magnificence, a live ink painting performance and a professional Chinese dancer in traditional dress. After enjoying a lunch of sushi, hake fingers and prawns, we waited for the announcement of the results. We were awarded a prize for the school with the greatest potential and talent in the smallest amount of study time. We were awarded a golden trophy of the Temple of Heaven, a silk scroll and a traditional Chinese ink painting as well as t-shirts to commemorate the wonderful event. This was our year to see and learn what the competition was about, so that we can participate again next year and re-live the unforgettable journey. We have only been learning Mandarin for a very short time and I am so proud of my team and can see the bright, burning hope of future progress and moving from strength to strength.

There are not many schools in South Africa that can boast teaching Mandarin, and the few that do would wish for a teacher like Mrs Hu, a teacher of the finest quality. The whole point of learning a new language, a new art form, is to use it and allow it to open up a whole new world and have it change your life. There is a need to broaden our horizons, remembering that Mandarin is the most spoken language in the world.

I would like to express my immense gratitude for this incredible opportunity, an opportunity that not only equips us with an amazing skill, but also allows us to understand the beauty of another culture and have a hand in the peaceful and riveting co-operation and journey of learning, involving our two lands. We are truly moving forward, making a difference and creating a better tomorrow, together.

Thank you so very much to my teachers and school for this experience of a lifetime.